Graffiti can vary from your crude bathroom stall scribble, for a good time contact the intern dept. to the revolutionary scrawling of a young Chairman Mao, look it up, I shit you not. It is everywhere we look in this city and has kind of grown to become a part of it as it snakes its way around the corners and up the signposts into our hearts. Its authors are the disenchanted youth, the fame whore, political activist and the drunken lout and yet it remains one of the simplest and readily available art forms available to us as the general public.
If we have missed any styles or wrongly described any of these sections, please forward your complaints to your nearest blank wall.

Tagging
This is probably the most familiar style you will see. Varying in complexity from some colorful and amazingly detailed designs to the almost illegible scribble whose sole purpose it seems is to cover as much surface as possible. It is the most accessible of graffiti methods as it doesn’t need any extra equipment to do. To see some of the best Prague has to offer go to Tesnov tram stop and check out the legal wall, or head down under Barrandov Most and along the river bank to see how it can be done.

These babies went through a boom in the last 10 years thanks mainly to the British artist, Banksy. But it is really in the late sixties when they first reared their two toned heads. John Fekner is credited with some of the first works in and around New York and later French artist Blek le rat covered Paris in rats showing how one simple cut-out can lead to a movement. Wikipedia says: Stencil graffiti makes use of a paper, cardboard, or other media to create an image or text that is easily reproducible. The desired design is cut out of the selected medium and then the image is transferred to a surface through the use of spray paint or roll-on paint… Fair enough.

Wheatpaste is glue made from flour or some other starchy material. It is cheap durable and easy to apply. Wheatpasting is exactly what you think it is, using this stuff to glue posters to the wall. Famous artists like Sheppard Fairey have used this technique to bomb cities with his mass produced “obey giant” posters

and recently his “obama, hope” posters played an unspoken role in that Presidents election. The sticker culture is, like stencils, going through a boom right now. Need I describe them or just tell you to look at the back of any street sign to see what I’m talking about?

Foamies
Foamies are those painted bits of polystyrene stuck to the sides of buildings. Made by carving shapes out of packing foam and covering in a non-corrosive paint, these are light weight, transportable, quick to put up and are fast gaining in popularity.

These can sometimes be used in pieces to create more 3D architectural tag designs or characters, while are other times just used as a protruding surface for simpler 2D designs to be painted onto.

These used to be homemade bits of carpet rolled up in a pipe and filled with ink but have quickly turned into the scourge of every transit official in the world. Since these fuckers got mass produced with their fat tips and indelible ink it seems every Jirka, Lukas and Lubomir is leaving their mark on the city. Recently these were made with a large range of colors but yet I am to see someone use them to their full potential. Keep at it.

Ever wondered how someone was able to draw that massive dong 4m off the ground with not a drainpipe of ledge in sight to climb up? Get a long-nap rolling sleeve and an extension pole and wonder no more. The Police on the other hand might not share your same enthusiasm and you might spend a night down on Konviktska ul. with the boys but hey, that roller pole has more than one use.

This is simply when you get some nail, key, knife or any hard object and scratch into glass. Seen here mostly on the windows of metro cars, it is also one of those styles in need of a serious re-vamp before it gets any serious attention from someone other than the local constabulary. 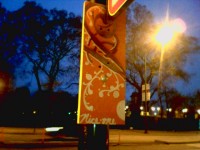 Artwork painted on a small portion of plywood or similar inexpensive material and attached to street sign posts with bolts. Often the bolts are bent at the back to prevent removal, popular in Australia although I haven’t seen that much of it around Prague.

And so… can in hand and with a steaming head of aerosol we wish you illegitimate scribes of our time, with all your infighting and battles on the fore-font of legality, all the best in your quest for territory control or whatever you do. Just keep making us smile on our way to our shitty jobs every morning.