The city police aren’t animals, you can joke with them

Damien Mitchell is a young Australian artist living in Prague. We met in the club 2. patro where he came with his dog Franta whom he found a couple of years ago. You might have seen his stencils around the city but he also exhibits in galleries. Some of his works have caught my eye before. But the main thing he is known for is the concept of Guerilla Gallery in which he takes over damaged and 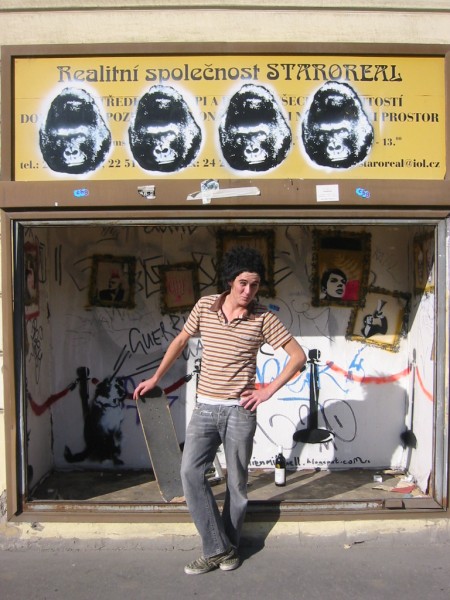 unused window boxes and transforms them into free spaces for anyone to contribute to. He is also a freelance writer and runs a DIY project for young designers to promote and sell their works, designpoint.weebly.com.

Firstly I would like to ask some questions about you. How long do you live in Prague? What do you do for living besides art?
I’ve been in Prague since 2005. I came here from a town called Wagga Wagga in Australia. I do some writing for an Australian magazine called Pedestrian.But the painting stuff is the main thing, I´ve been doing it for seven years now.

Have there been any problems with the police in Austalia with painting? Are they strict in this area?
I’ve never really had problems in Australia. Here, I’ve had a couple problems with the police, but they’re actually pretty normal people most of the time. Generally understanding that what you are doing is stupid but not really causing any major problems, you know what I mean? Here the city police aren’t animals, you can joke with them.

Tell me about the guerilla gallery thing…
It all started about a year ago when I was living over in Žižkov with my friend Steve. We saw this window box that hadn’t been used for

years and years. It was destroyed, full of broken glass and garbage so we went and cleaned it up one day and thought „Let’s make a gallery“. We wanted to make a free place where artists could come and exhibit publicly with all the natural reactions that go with it, I mean if someone liked it they could tear it down and take it home. If somone hated it they could paint over it, no problem. We put up a false cardboard wall and wrote an opening date. When we came back there were some people around and we had a little street party.

Is it still there?
No, after it was realized as a valuable space it got glassed over. Now there’s some ad for a real estate agency i think. They had an open submission for the space and one guy was even going to finance it for us, with The Chemistry Gallery doing the official stuff. They have always been good in supporting this kind of thing. Anyway, in the end our application was denied in favor of another real esate agency, or florist or something.

Do you have some place now to put your things on? Plans for another gallery?

Yeah. There is now a wall next to my current flat which I’m filling out slowly, but at the same time the Guerrilla Gallery idea is something that anyone can do anywhere. There are more and more starting up around the world and I am working with them on

various projects. I like to go to places where other people can do their thing too.There are some other spaces I am thinking about in Prague but I am open to ideas and collaboration.

You also had exhibitons indoors. I know you had one in NoD with the vinyls, one in the Chemistry Gallery but you were also on the 4th Prague Biennale! How did you get it there? 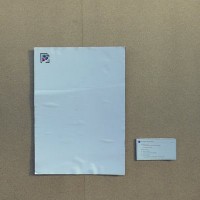 I just walked in and put it up on the wall! It supprised me how long it lasted. I even had my personal phone number written there but nobody called or said anything.

How about the topics of your stencils – how do you think of what to do? I’ve seen some political ones – the British queen with a guitar or Obama… Is there a political message or protest?
This series was a play on contemporary icons. I’ve been trying different stencil styles and the black and white single layer is the typified stencil look that I thought would

work best. I have made wrist numbing twenty layer stencils and have tried them with dots instead of lines or using negative space. The politcal theme, I suppose is a light form of protest but to me they are just dumb jokes… school boy humour…

When you put your pieces into galleries do you still think it’s street art?
No. The name street art means it is on the street. The style is popular at the momentand 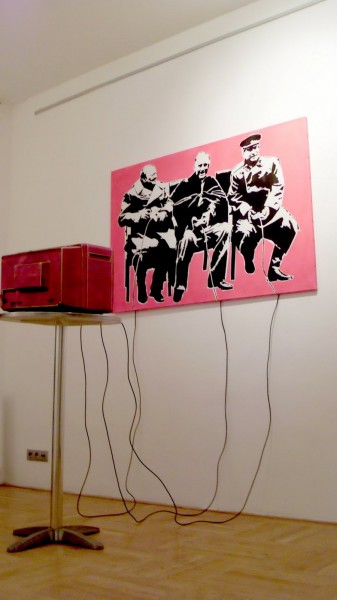 I think galleries like to banter the name around. The name „Gallery art“ just doesn’t have the same ring to it I suppose.

What do you think about Czech guys around street art, are you in touch with them?
I never got involved with any crew. I do it by myself. But there is a good scene here and I have seen some really talented artists come up. The festivals are a good breeding ground and a good place to swap ideas. I would like to see an annual Names fest start up.

Is it ok to sell street art pieces?

Well, thats the beauty of it, they can’t be sold if they’re painted on someone’s wall. If its allowed then it isn’t really graffiti, is it? The great thing about stencils though, is you can produce thousands of the same image and put them in a multitude of contexts. In a small town with one stencil and a can of paint you can become famous over night.