There´s still a place on the other side of the world where nature looks the same as it did a thousand years ago. However, there have been more different factors that  have affected the New Zealand culture.

The culture of the islands stands on a variety of traditions that have combined together to build up today‘s cultural environment. The first one, embedded in history, is the indigenous Maori culture. Althought the Maoris are not the original inhabitants as many people think. They are said to have come to New Zealand in 14th century most probably from the Pacific Islands. Despite the fact they had to overcome bloody fights against the Europeans in the 19th century, they have kept their culture alive. Nowadays there are many sites where people can experience Maori culture, of course without any fees – it is an important part of the education. The Maoris themselves have traditionally gathered in so called „maraes“, wooden-curved buildings which serve as cultural centres. They use only natural materials such as wood (curved sculptures), stone (mainly the greenstone or jade), bones and shells (shiny blue paua shell is unique for the Maoris).

The other cultural influence which has affected the culture of New Zealand today comes from the Pacific Islands and is comparable to the Maori one. Thanks to the massive immigration from Asia numerous Asian communities, mainly in the bigger towns on the North Island, have developed, and they still preserve their own culture.

Roots of the Independent Art Scene

The Europeans, mainly the British, came to New Zealand in the second half of the 19th century and brought their habits and customs with them. However, they didn´t have the means to create professional arts and the artists weren´t able to make a living from their work. So they had to find other ways. They were influenced by the nature around them and of course by the Maori culture. And they started to reflect it in the style of their work.

Globalisation reached New Zealand in a massive wave in the 1960´s. The hippie style came from Australia and US and started a brand new lifestyle. Farmers left their homesteads, hopped in vans and busses and travelled around the country. They cultivated hand crafts and shared their products on flea markets. This tradition is still very much living even today. People sell their hand made products for minimum prizes or trade them. There are big hippie communities which not only share food, work or houses, but also open their galleries for free to whoever wants to come. Although some New Zealanders might seem conservative or even prudish but the hippie style with all its atributes is still seen strongly in the society. 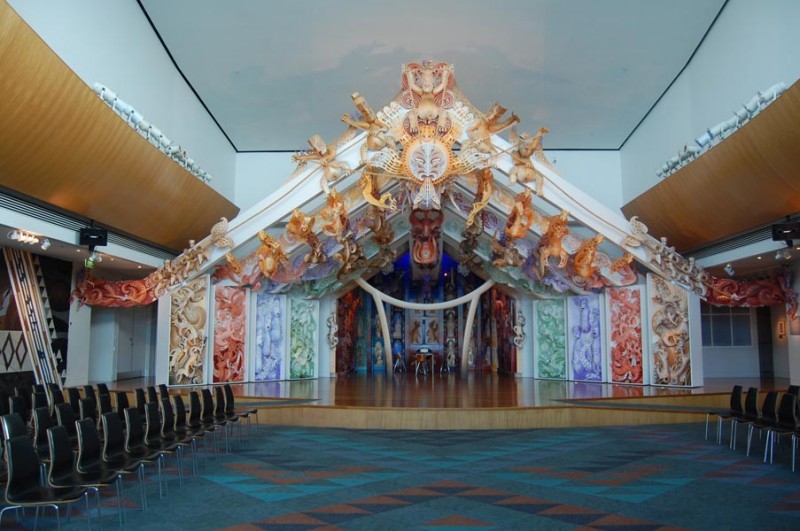 How is the Government Involved?

The government treats these varied culture as the heritage of mankind and donates big financial support to the cultural sphere. Entry to all the important galleries and museums (including the national museum Te Papa in the capital, Wellington) is free of charge and a lot of concerts and festivals are government sponsored. To put it frankly, there have also been some problems, expecially alcohol. Because of the „drinking problem“ alcohol (even beer or wine) is usually prohibited on all the events, together with smoking (ironically some natural drugs are allowed). Therefore young people arrange a lot of „free parties“ in natural surroundings.

As religion and charitable sentiment is deeply rooted in the nature of New Zealanders, people give books and magazines for free to those who appreciate them.  Needless to say public libraries with access to the internet are open to everyone. There are some free magazines as well but because of the liberal press law the quality may vary considerably and may range between from art reviews to radical and even anti-domocratic subcultural sheets.